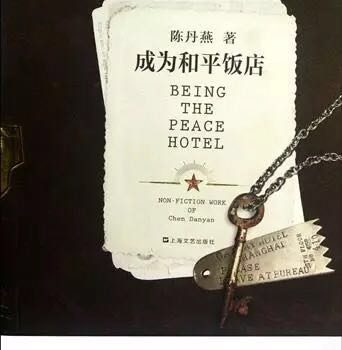 I am reading “Becoming the Peace Hotel” , written by a well known Shanghai author Chen Dan Yan, a native of Shanghai and she has spent years to craft narrating about this city. It seems that only Chen can convey the essence of this city’s glamorous tale.

On the Bund, divided by Nan Jing Road, the Peace Hotel includes two buildings facing each other. The larger one is the North building, built by British businessman Victor Sassoon in 1929, he lived in the penthouse on the 10th floor until the end of the 2nd World War. This was one of his many Far East business ventures, Many celebrity guests stayed there, such as Bernard Shaw, Charlie Chaplin, Noel Coward.

Like many other significant landmarks in Shanghai, the hotel lost its lustre certain period after 1949, it was used for the municipality functions. Even then, the history of this hotel still intrigued people. It was noted it offered the best western food in Shanghai in the 70s.

The hotel is run by Fairmount Canada currently. It stands in the same league as New York Waldorf. In 2007, it went through three years of painstaking renovation to return its renaissance splendour. Its Octagon lobby is in full view when you entered the hotel.

Not to mention restaurants and café (Victor Café is named after its original owner Sassoon), the most impressive thing about it is its live-in Jazz band, some of the band members been performing in the hotel over 30 years. It makes your Shanghai trip fascinating to enjoy the jazz there after dusk.

Such a legendary place, it somehow represents the heritage of Shanghai, I wish there is a film one day to show how things can evolve with the passage of time, it can be a fiction or a romantic storytelling. Well, the novel “Becoming the Peace Hotel “ is a good start.